Maths is for life…not just for Christmas 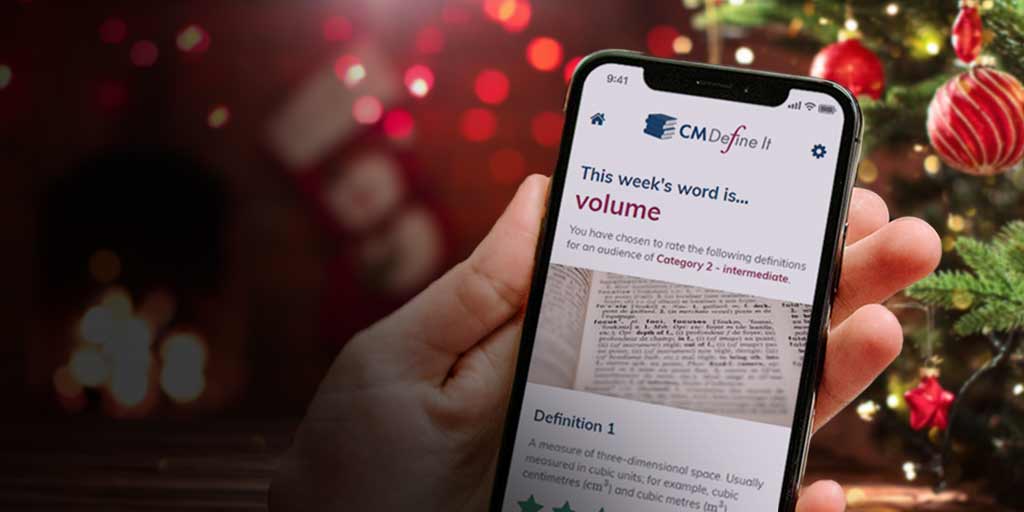 Have you written your Christmas list yet? What if the educational community had a stocking? What presents would we want to wake up to?

If you are in a field that deals with maths, whether teaching, research, academia, assessment or resource development and even curriculum design, you may (or may not) have found that definitions of mathematical key words are quite often inconsistent.

They may be too difficult, not give enough information to build a whole picture, or vary between cultures. For example, a ‘trapezium’ is known as a ‘trapezoid’ in the US and ‘indices’ are called ‘exponents’. These are just some of the language differences that exist and create inconsistencies in the use of mathematical vocabulary.

All I want for Christmas is… Consistent Mathematical Vocabulary

Some key words may be poorly defined or inaccurate and support misconceptions about mathematics. For instance, if you Google the term ‘sample’, the first definition that comes up is “a small part or quantity intended to show what the whole is like” followed by “a sound or piece of music created by sampling”. These definitions see ‘sample’ as a term used in everyday language rather than a term often used in statistics, which refers to a proportion of the population, and which can in fact be highly unrepresentative of the population because samples are often very different.

Knowing this is key to understanding the value of hypothesis testing, and a misconception can have serious implications for future work with that mathematical idea.

Can we stop the cycle of inaccuracy? How can we improve mathematical definitions?

Have an ‘Appy Christmas

The Cambridge Maths team decided to address this issue by finding out what makes for a good definition and what those who work with mathematical key words would appreciate in a definition.

They have developed a crowdsourcing survey app called CM Define It, which presents users with one mathematical key word per week (word of the week) and up to five definitions of the word.

It asks users to rate each definition on a five-star rating scale; they are also asked to select the category of learners they mostly work with from three possible groups: novice, intermediate and advanced. If they wish they can answer for more than one category of learners.

This information will be useful, for example, for teachers who teach students who are at different levels of sophistication of understanding.

App users are asked to expand on their ratings by further rating more specific elements of definitions on a five-point rating scale. The questions ask if:

The sources of the definitions are referenced at the bottom of the screen, but it is not specified which definition has come from which source. It includes a mixture of international sources, and definitions that address different types of learners.

An interesting feature of the app is the ability to view last week’s results. Users can see the definition that was rated highest overall and filter by the three categories of learners. Results also show how users rated the technical accuracy, emphasis of key points and the other more specific aspects of the highest rated definition. Finally, CM Define It allows its users to view all of their previous responses.

I’m dreaming of a whole glossary

Even if everything above sounds great, you may be asking ‘why’? Why should I rate some definitions? Why is it important? Ultimately, the responses will inform the glossary that will be attached to the Cambridge Mathematics Framework. What could be more powerful than drawing on the expertise of those who use mathematical vocabulary daily to create a holistic and accessible glossary for that same audience?

Going back to the very first question posed at the start of this blog – you may know what you want for Christmas. To answer the second question, perhaps some teachers would like a single collection of mathematical definitions that is accessible and explains concepts effectively…

Perhaps teachers, academics and researchers investigating mathematics and mathematics education would like a glossary that does not encourage misconceptions…

If this resonates with you or anyone you know, please sign up and rate some definitions to help us build a glossary in line with what the mathematics community wants.

You can sign up by visiting https://cmdefineit.org or by installing an app version for:

(if using an iPhone or iPad, you need to open the link in Safari in order to install the app).

Find out how CEM’s InCAS assessment can help support your students’ maths ability and progress.

Do you avoid maths at all costs? How do you feel when working out your change, splitting a bill...

It was inevitable: the school closures were going to present more than a few challenges for...