Why assessment may tell you less than you think – Part 2 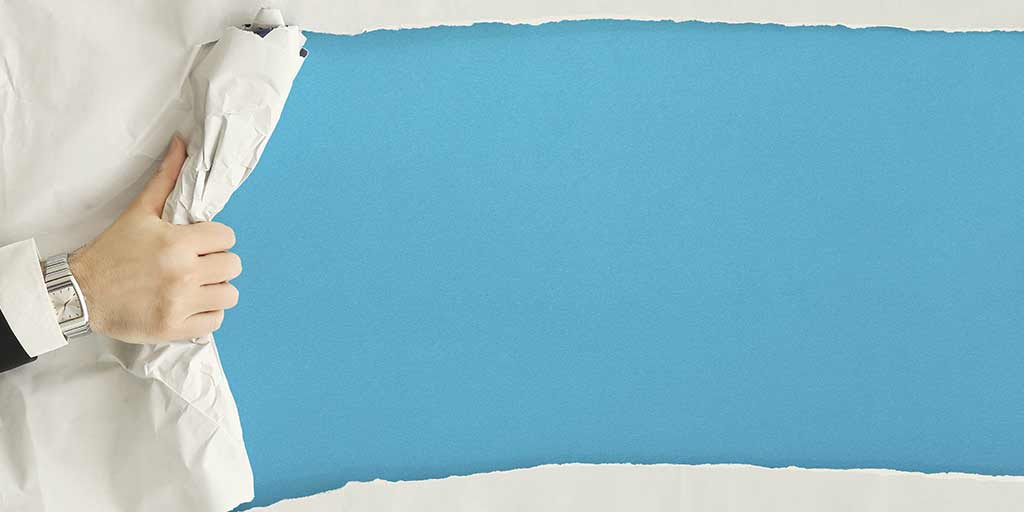 In part 1 of this blog post, I posed five questions about these uses of assessments. I’m going to take these questions in reverse order.

If 25 out of a class of 30 get a question right, what does this tell us about their true knowledge or understanding?

Below is a graph that illustrates a typical pattern of the relationship between the true understanding or knowledge we are trying to teach and assess (on the horizontal axis) and whether pupils got the question right (plotted in blue, against an item score of 1) or wrong (plotted in red on the bottom, against a score of 0). 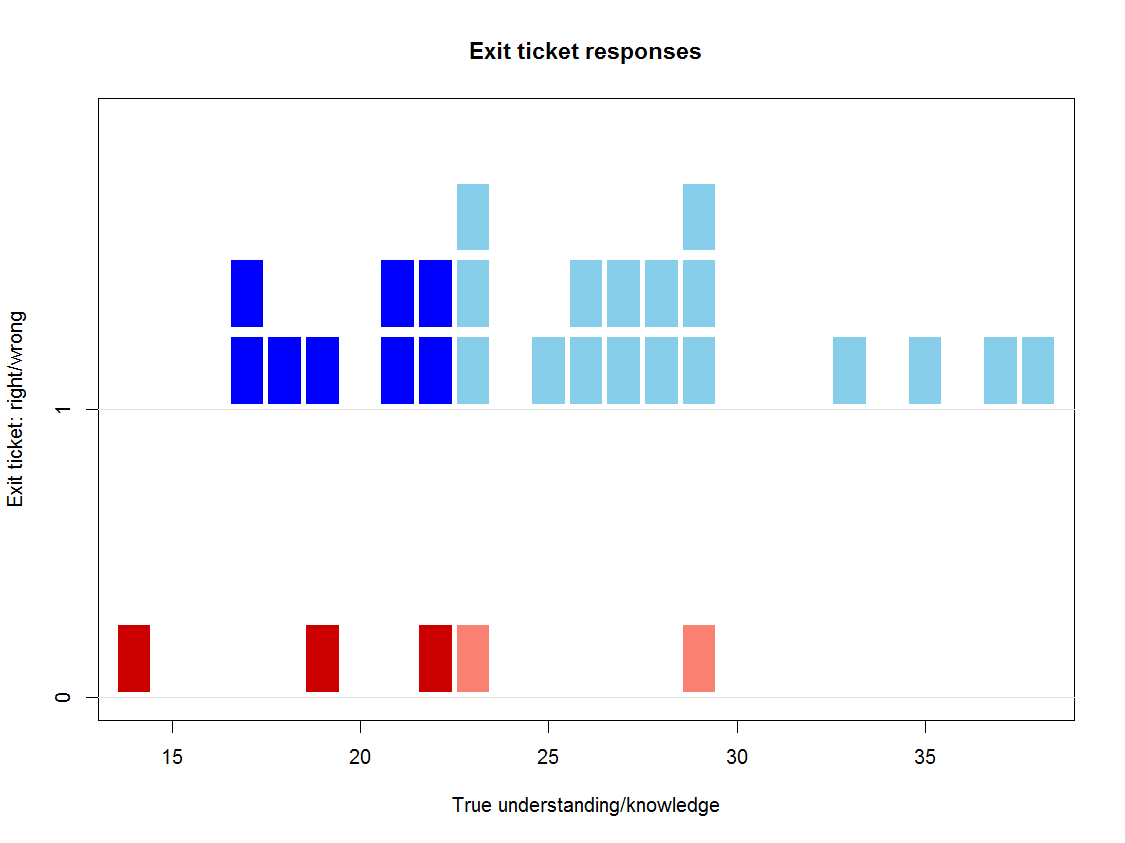 If we drew the ICC on this graph we would see that ‘true’ scores of 23 and above correspond to having an 80% chance or better of getting this question right. The vertical pink dotted line denotes this threshold and the people to the right of it are shaded paler.

Of the five who got the question wrong, two are above our threshold; of the 25 who got it right, eight are below. In other words, if we wanted to reteach the material to those who actually need it, we would teach it to the 11 pupils to the left of the dotted line.

If we use this question alone to try to identify them, we will teach to five, and reach only three of the 11 who need help. This does not look like a very efficient way of targeting extra help.

In fact, there is another problem with interpreting the responses to this question. The fact that most of our pupils got the question right might just tell us that the question was easier than we thought.

Unless we can reliably judge the difficulty of a question, it is hard to interpret right (or wrong) answers as indicating a particular level of understanding. Because the use of ‘expert’ judgement is a standard way of trying to establish the difficulty of a test, there is quite a bit of research on how accurate it is. Unfortunately, the answer is not very.

Studies typically find that unstructured judgements of the expected proportion who will get a question right typically correlate about 0.2-0.3 with the actual proportions (Bramley & Wilson, 2016; Attali et al, 2014). That means if you estimate the proportion as 0.5, the actual value will probably be somewhere in the range 0.2-0.8.

Taken together, these two issues mean that deciding whether to reteach or move on based on a single question doesn’t seem to be such a great idea: responses to a single question are a very imperfect indicator of what we actually want to know, and the true difficulty of such a question is very hard to estimate.

So my answer to Q3 is that any of these choices may be fine, but it shouldn’t depend on how many got the question right. Hence, the answer to Q4 is no and Q5 does not apply.

Another way to illustrate what is essentially the same problem is to compare the information we get from responses to one question to what we already know. As there is not much information in one question, and we usually already have quite a bit of information about students’ level of knowledge, once again the response to a hinge question should not really make much difference.

Q2 was framed in terms of a single student answering a single question. If when we pose the hinge question we already have an assumption about whether they are likely to have enough knowledge to proceed, we must weigh up and combine the two sources of information.

To do this we can use Bayes’ Theorem, a simple equation that is the basis for a whole branch of statistics. In a Bayesian approach we have to quantify our prior belief (ie before getting the answer to our hinge question) and level of certainty about whether the student knows enough to proceed.

By translating these assumptions into a statistical model and simulating responses, I was able to answer my question. I modelled three cases, depending on how much information we have about the student’s likely level of knowledge. In each case, we can capture our belief about the student’s level as a probability that they have ‘mastered’ a particular concept.

To illustrate, I have chosen 80%: at the time we ask the hinge question we believe there is an 80% chance that this student has enough knowledge of the topic to proceed. As I have already said that there are no dichotomies in assessment, I should make clear that ‘mastery’ here denotes being above a particular threshold that we can specify.

In Case 1, we simply know that they are of secondary school age (ie 11-16) and in the UK. With such limited prior information, we might think that the hinge question could be decisive. However, even if they get the hinge question wrong, my simulation suggests our new ‘posterior’ estimate drops to 63%: it is still more likely than not that they understand enough to proceed, so we should press on anyway, albeit with slightly less confidence.

Case 2 assumes we have some prior attainment data for that student, such as their KS2 scores if they are of secondary school age, or a standardised test score like MidYIS or InCAS. It would be quite rare for any teacher in a UK school not to have this kind of information, I think. Now, our posterior estimate is 68%.

In Case 3, I tried to model the situation where a teacher has a range of prior attainment data (eg performance on previous topic assessments) and information gained from the teaching process: you have taught this topic, seen the student’s work in class, asked them questions, etc. In this scenario (which seems to me the most realistic for ordinary classroom situations), your prior estimate of 80% falls only slightly to 72% when they get your question wrong. In other words, you started out confident this student had got it, you asked them a question, they got it wrong – and you should still be pretty confident they have got it.

How accurate is a test score? This is essentially an aspect of reliability, but like many things in assessment it often gets a bit confused. Reliability is usually defined in terms of replicability: how consistently would an observed score be reproduced if we could repeat the assessment process?

If we could repeat the process, some features would remain the same (the person taking it) while others change (the day or time it was taken, which questions were presented, who marked it, etc).

I’ve already said that assessment is about making inferences, usually about a person’s knowledge/competence/ability over some time period. In other words, we are not usually interested in the actual score they got on the day, but on what it tells us about them.

Classical Test Theory (CTT) uses the concept of a ‘true score’ to capture this idea of the underlying characteristic we are trying to measure that in practice we can infer only imperfectly from an observed score on a particular occasion.

CTT treats reliability as an estimated correlation between repeated test scores. Hence it is a number between 0 and 1, where values close to 1 indicate high consistency between repeated administrations. In CTT we account for the fact that an observed score will vary on repetition even though the true score is constant by calling the variation ‘measurement error’.

The statistical model underpinning CTT allows us to connect the reliability with the Standard Error of Measurement (SEM). SEM tells us how much the observed scores vary around the true score, in other words, how precise they are.

Applying another statistical model, we can show that the difference has to be around three times the SEM before we can confidently say (and expect to be wrong less than 5% of the time) that the pupil with the higher score is genuinely better than the lower.

In my Q1, with the assumptions I gave about the standard deviation of the class’ test scores and the reliability of the test, that means two scores have to differ by 8 marks for us to be confident that the higher is really better than the lower. My guess is that this would be about typical for classroom tests of this length. However, if it is a good test, or with a group with less varied scores, a difference of 6 marks could be enough.

A nice way to illustrate how the precision of a test allows us to separate people with confidence if their scores are sufficiently different has been suggested by Wright and Masters (1982), who convert a reliability estimate into the number of strata of performance that can be distinguished. This relationship is shown in this graph: 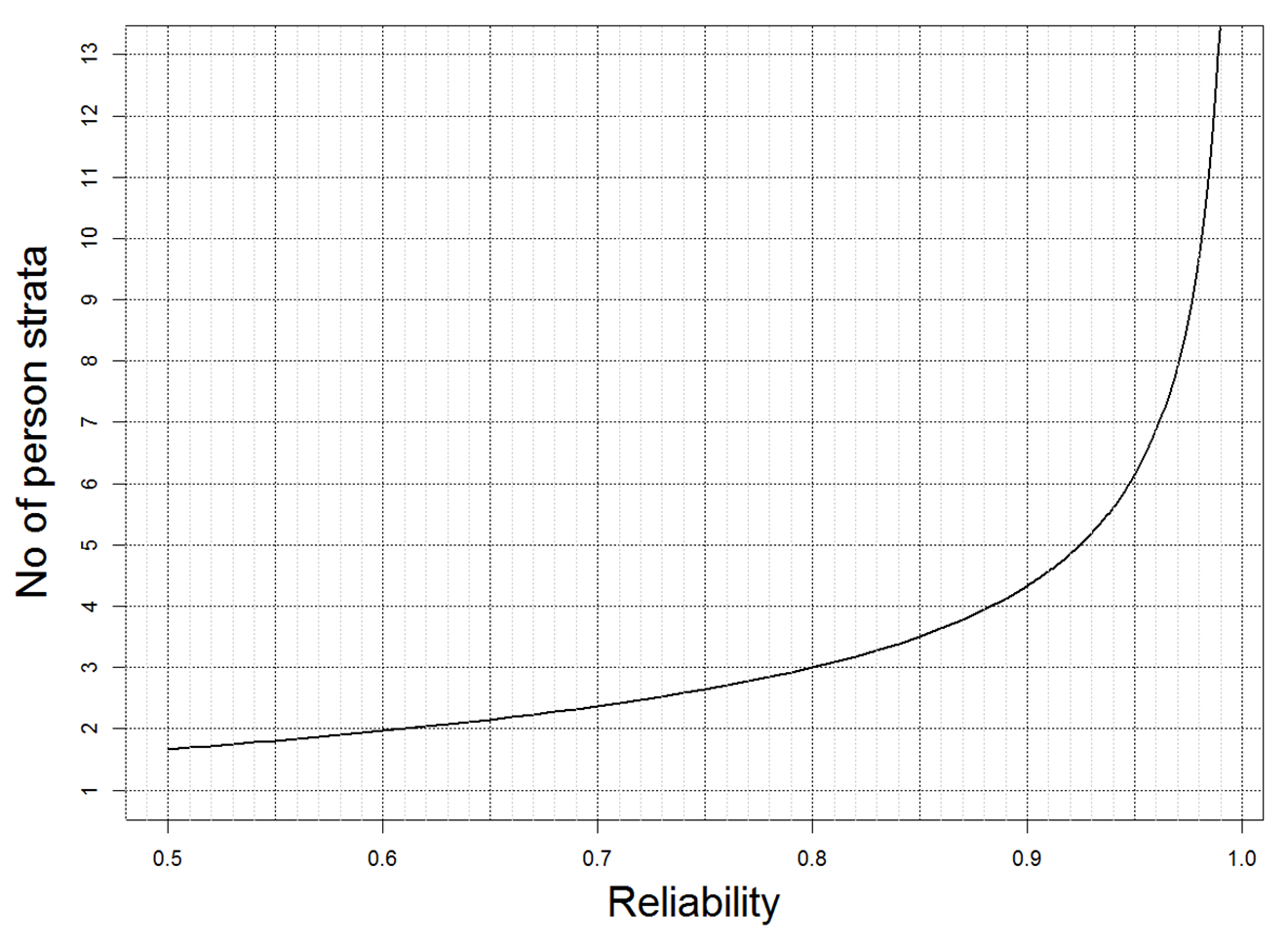 We can see that until reliability reaches 0.6, we cannot even distinguish two categories with confidence. To get three categories we need reliability to exceed 0.8, and achieving a reliability of 0.9 – which many people would interpret as being very high for an educational test – allows us to separate people into only four strata.

This has been a very long explanation and quite heavy in technical content. I hope it has been worth it!

Often, it tells you less than you think.

But that is NOT AN ASSESSMENT!

7 questions you need to ask about assessment

Where is the value in assessment?

5 things I’ve learned about the importance of good assessment

by Professor Robert Coe We’ve all done it: observed another teacher’s lesson and made a judgement...

At the Festival of Education 2018, Rob Coe’s presentation followed on from his recent blog post But...

Why assessment may tell you less than you think – Part 1

By Rob Coe I was inspired to write this blog by reading Harry Fletcher-Wood's book ‘Responsive...